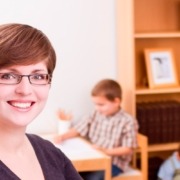 Childcare, lack of maternity and parental leave, unsociable meeting times are some of the barriers which have prevented female representatives from fully participating in political life. Most recently South Dublin County Councillor, Clare O’Byrne, resigned her seat citing lack of maternity leave as a key barrier. While parenting and care responsibilities are not gender neutral, in Ireland women still disproportionally hold the majority of unpaid care responsibilities.

Women for Election strongly advocate for family friendly working practices in order to create a working environment which provides equality of opportunity for aspiring and elected female politicians. In addition to standardised maternity, paternity and parental leave these practices also include the promotion of work/family life balance so that all members of Local Government can fulfil their work and family roles and duties.

Women for Election was honoured to be asked by the Ceann Comhairle to participate in the Oireachtas Forum on a Family Friendly and Inclusive Parliament. Our Chairperson Alison Cowzer represents us on this Forum.

The Forum will offer advice and recommendations to the Ceann Comhairle, who will bring the Forum’s report to the Houses of the Oireachtas Commission for its consideration.

The Forum shall consider and make practical recommendations on:
(i) making the Houses of the Oireachtas a more inclusive, family friendly, and gender- sensitive workplace for the parliamentary community;
(ii) ensuring that the Houses of the Oireachtas are supported and resourced to take account of gender and equality issues when legislating;
(iii) improving the diversity of the parliamentary community to better reflect society in Ireland.
We were delighted to present to the Forum in July 2021 and we look forward to further assisting the Forum to help ensure that the voices and insights of the many women we work with are reflected in the Forum’s recommendations. 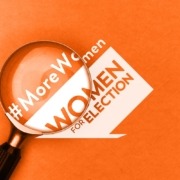 Women for Election were asked to present to the Citizens Assembly on Gender Equality and made our presentation in November 2020.

We were delighted to see our 3 proposals included in the final recommendations of the Assembly.

The report of the Citizens Assembly on Gender Equality was published in April 2021. 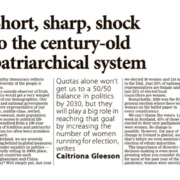 The issue of quotas in politics is one which causes much discussion – some people do not like quotas, but we like what they do, that is, introduce a short, sharp, shock to the political system that makes change happen quickly. An increasing number of countries globally are introducing gender quotas to improve gender balance with impressive results. Relying on organic change to the Irish political system has resulted in a glacial pace of change, with the current Dail comprising only 23 % women TD’s.

There are currently no quotas in place for Local Elections (where many politicians begin their political journey), or for the Seanad.

In our recent submission and presentation to the Citizens’ Assembly on Gender Equality Women for Election proposed the introduction of quotas for the Local Elections and for the Seanad.

We were delighted that our proposals for quotas were accepted by a large majority of the Citizen Assembly members with 88% in favour of introducing quotas to local and Seanad elections and 75% in favour of financial sanctions for parties who don’t meet the minimum threshold. We will continue to advocate for the full implementation of the recommendations without delay. 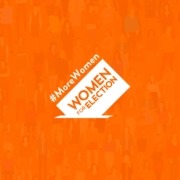 The long, arduous canvas is over. The elbows have been bumped. The leaflets have been distributed. The votes have been cast. And this morning, the staff at the RDS will tumble the ballot papers out of the familiar black boxes to begin the count on the Dublin Bay South Bye-Election, all under the watchful eye, of course, of the uniquely Irish tallymen and women.

Nothing new here really. It’s a scene that is played out during every election we have held in this country over the past 100 years since we gained our independence.

But, perhaps this time, in Dublin Bay South, there is one critical difference. The electorate in this mostly leafy, relatively well-off constituency running from the south inner city out along the South coast road to Merrion and across to Terenure has been given one of the best opportunities ever to elect a strong, progressive woman to the Dáil.

Let’s just say it’s certainly harder for the electorate not to elect a woman. Of the 15 candidates on the ballot paper being tumbled out on the trestle tables this morning, nine are women and six are men – so a 60:40 gender split in favour of women.

This bye-election isn’t the first contest for Dáil Eireann where the electorate is offered a majority choice of women on the ballot paper. However, this is still the greater exception rather than the rule. It was only in 2020 that there was, for the first time, at least one woman on the ballot sheet in every constituency in Ireland. In that same election, almost a third of constituencies (12 of the 39 in the country) did not elect a woman. Dublin Bay South itself reverted to an all-male line-up in 2020 when Kate O’Connell lost her seat there.

While the 2020 General Election saw 36 women elected to Dáil Eireann, the greatest number ever, this still only represents 22.5% of those who sit in our national parliament – or one in five TDs. The picture isn’t much better in other political and decision making arenas. Only 25% of elected councillors are women. Only four of 15 Ministers at the Cabinet table are women and, concerningly, women are currently completely absent from or under-represented at critical government decision making tables, including health and the Covid-19 national response.

It’s little wonder that Ireland still languishes in 99th place in the world for the percentage of women in government, far behind countries like Afghanistan or China. In this decade of centenaries, it’s interesting to look back at where our politics started. In 2021, Ireland elected six women to the fledgling Dáil. One hundred years later, there are just 30 more taking up national seats – not exactly massive progression by any measure.

However, if the voters in Dublin Bay South do opt for a woman after today’s count, there is an opportunity to get from 0 to 25% on the gender equality scale in the constituency itself and the chance to move Ireland from 99th to 92nd on the world ranking. It’s a small step but one in the right direction towards a more representative and diverse politics in Ireland.

It’s because of this absolute need for diversity and representation that Women for Election is so dedicated to seeing more women elected to our politics, both nationally and locally. Currently, when decisions are made about our lives, our homes, our health, our communities, our businesses, the diversity and value of women’s contribution is largely missing, or at best under-represented. This has to change, constituency by constituency.

It’s been heartening to see many political parties put forward such powerful women for the Dublin Bay South Bye-Election, although the selection still lacked representation from ethnic minority or other more marginalised groups. The introduction of 30% gender quotas in 2014 was an important if somewhat uncomfortable first step towards achieving greater representation. For Dáil elections beyond 2023 parties will need to ensure 40% of the candidates selected are women. The Citizen Assembly has also voted to recommend quotas for local and Seanad elections which is a welcome affirmation. At the end of the day, a 50/50 gender balance in government is key to Ireland becoming a thriving vibrant society, reflective of the many progressive steps we have made particularly over the past decade. But we still have a long way to go to get there, based on current figures, and irrespective of what transpires later today, or into the wee hours of tomorrow morning perhaps.

On a stroll around the constituency last weekend, it was great to literally see a potentially changing face of Irish politics with so many posters for female candidates. I was excited to later show the photos to my daughters, and encouraged that younger women and girls can start to see themselves represented in a modern, diverse Irish politics.

Women for Election is working to inspire, support and equip more women to enter and succeed in politics. Our extensive range of training programmes, including our flagship Inspire Campaign Schools, are reaching hundreds of women across Ireland every year. The success of these programmes is borne out in the posters that festooned Dublin Bay South and that will start to be removed over the coming days – hopefully to be re-used again in the next election. We are proud to see so many graduates and supporters of our work running for this bye-election.

As a non-partisan organisation we have not shown any favouritism. However, now that the votes are cast, and without any disrespect to the men in the field, we hope that the best woman will win in Dublin Bay South, and more importantly, that women who share our vision for equality and human rights will be inspired to stay in the game for the next time. We have a long way to go to knock a dent in the largely patriarchal institution that our politics has been for too long. But, things are changing, election by election, and vote by vote, woman by woman.

If you or anyone you know wants to know more about running for election, you can register for our next Women for Election INSPIRE Campaign School.