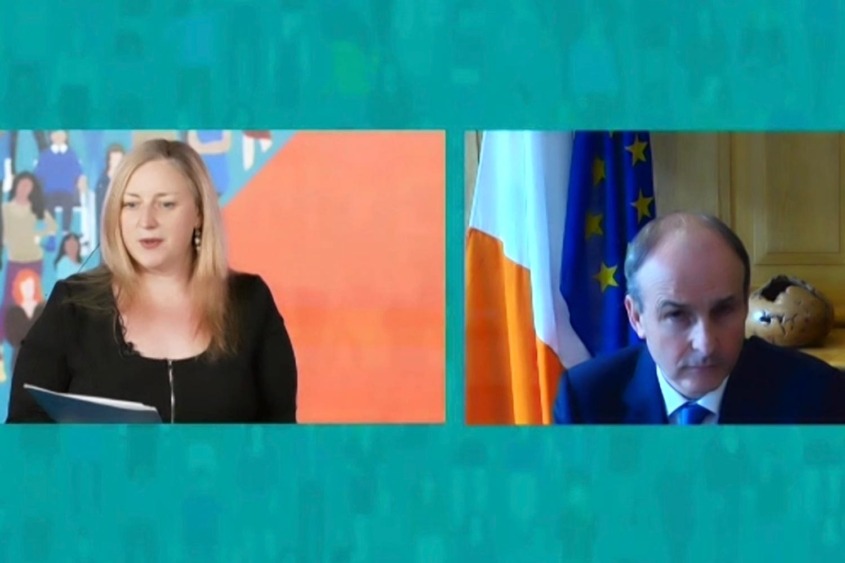 An Taoiseach Micheál Martin set out his vision to achieve 50/50 representation of women and men in Irish national politics by 2030.

He outlined his aspiration for women in Irish politics during a special Women for Election “In Conversation with” event to mark International Women’s Day 2021. An Taoiseach was in conversation with guest MC Dearbhail McDonald, author and broadcaster.

Women for Election is driving a five year strategy to get more women elected in the next local and general elections with the aim of achieving, at least, a 30% representation of women in local and national government by 2025, increasing to 50/50 representation by 2030.

An Taoiseach said that he was enthusiastic to see more women, and more young women particularly as “activist politicians”. He acknowledged that Ireland’s current position at 101st in the world for female participation in national politics was not a comfortable position to be in.

“We need more women in politics,”

he said. “Political life is wonderfully interesting. Every day is different. If you’re committed to public life or making a difference, my advice is to go for it.”

“We need young women in particular to go forward. And we probably need a new type of participation in politics. Over the past few years we’ve seen more activism in social issues like Marriage Equality. We need electoral reform and to rethink the models through which people enter politics to help more people and more women move from this type of activism into politics.”

He also said that he was committed to bringing forward the reforms required to facilitate paid maternity and paternity leave in Irish politics. He said that in the short term, he would facilitate the Minister for Justice Helen McEntee to take her maternity leave from this May.

He said that quotas were very important in term of national politics and he had found them very useful within his own party in increasing gender diversity. While he had no problem with quotas being expanded to local politics, he said however that he had more fundamental concerns about local politics in general because of its lack of diversity, and its increasing burden and complexity of workload. He welcomed the Moorhead report which recommends adequate remuneration for local politicians.

While quotas exist for Dáil elections, there are currently no quotas for local or Seanad elections. Currently, 22.5% of TDs, 25% of local councillors and 40% of Senators are women.

Finally, An Taoiseach said that he was concerned about the “very damaging” levels of on-line and off-line abuse that candidates and politicians received, particularly candidates from migrant and ethnic communities.

A recent Women for Election report, called More Women – Changing the Face of Politics showed that while the majority of women who run for election would encourage others to do the same, significant barriers still exist to their election success.

Barriers include the lack of full, paid maternity leave (and paternity leave) at all levels of politics, the risk of sexist, racist and misogynistic on-line abuse, including hate speech targeted and women and ethnic minority and migrant women. Another significant barrier is the ongoing resistance within party political systems to running new candidates, and particularly women candidates, in “winnable seats”.

Ireland ranks 101st in the world for the percentage of women elected in national parliament, behind countries like Afghanistan or China. Currently only one in every five TDs and 25% of elected councillors are women. Only four of 15 Ministers at the Cabinet table are women. In total, women are currently completely absent from 40% of critical government decision making tables, including health and the Covid-19 national response.

This special IWD In Conversation event was supported with a generous donation from FuelHQ.

For more information about the In Conversation With Series click here

We'd like to set Google Analytics cookies to help us to improve our website by collecting and reporting information on how you use it. The cookies collect information in a way that does not directly identify anyone.
Other external services